We received a triple-zero call for a 65 year old male from his wife, stating that he had suffered a seizure but was now conscious and breathing. The call was dispatched as Priority 2. Upon arrival, the patients’ wife stated that he had lost consciousness whilst sitting in a chair; she pulled him down to the ground, his eyes rolled back and she saw him foaming at the mouth. She commenced CPR thinking that he had gone into cardiac arrest, but she stopped shortly afterwards as he regained consciousness.

We were led into the living room where the patient was found lying supine with his head on a pillow and we commenced our assessment. Clinically the patient presented as relatively unremarkable and the primary survey revealed nothing of immediate concern; the patient was alert (though cool peripherally), he had a delayed capillary refill of 3 seconds and a weak radial pulse.

Upon further questioning it was identified the patient had suffered a sudden VF arrest 6 weeks prior and had since made a complete recovery. He was now on dual antiplatelet therapy (DATP) and ACE inhibitors. The patient was otherwise fit and well, normal BMI, non-smoker and consumed alcohol socially. His only complaint was feeling mildly dizzy and lightheaded; he denied any pain, nausea or shortness of breath.

Due to the seemingly similar presentation to his previous sudden cardiac arrest, a 12 lead ECG was quickly captured. 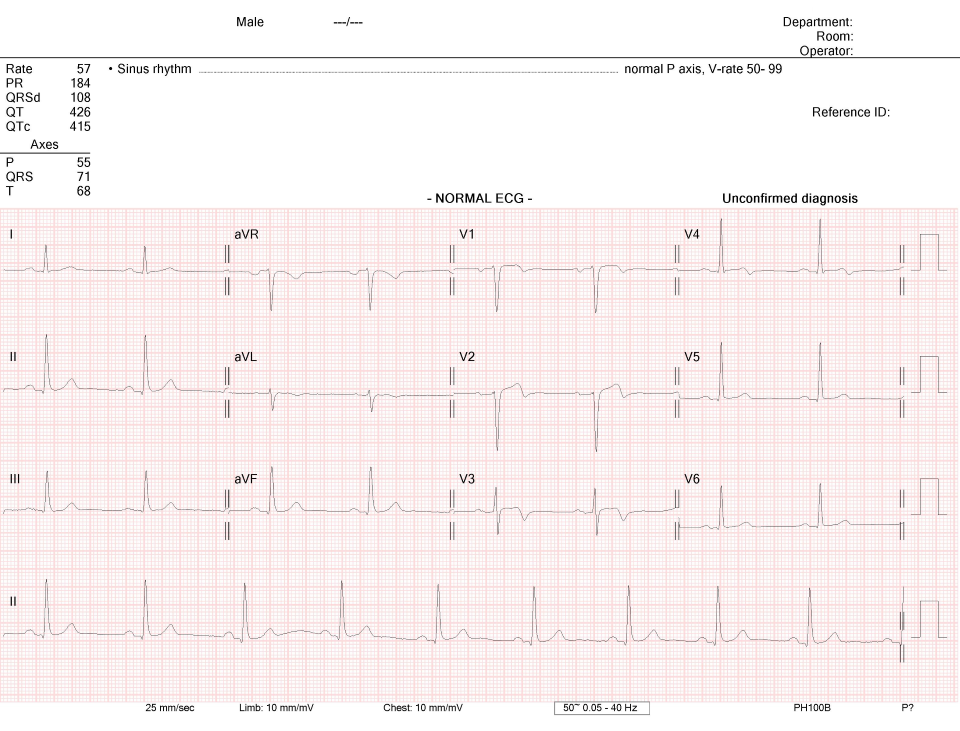 Whilst the patient presented as clinically well and it appeared that he had completely recovered from syncope, there are some concerning findings associated with his history and presentation. The patient had suffered a spontaneous VF arrest requiring stenting merely 6 weeks ago; his echocardiogram was normal and angiogram revealed some mild LAD stenosis.

The ECG shows a biphasic T-wave in lead V2 and deep inversion in V3; there is also T wave inversion in V1&4. This is clinically significant with Wellens’ Syndrome and should be treated as potentially life threatening. Wellens’ Syndrome is identification of critical coronary stenosis, primarily of the LAD. These patients often require invasive intervention and do poorly with medical management. They are highly likely to suffer sudden extensive anterior wall STEMI or cardiac arrest. The understanding of the T-wave pattern is that of transient acute STEMI followed by reperfusion with symptom resolution and morphing T-waves. The myocardium remains unstable however and can suddenly re-occlude at any time, with normalisation then hyperacute T-waves followed by acute STEMI or arrest. This may not necessarily be captured on a standard 3 lead ECG and is a stark reminder to everyone that the diagnostic benefits of a 12-lead ECG over what a 3-lead ECG can provide simply cannot be understated.

Given the high potential for sudden arrest in this case, a very gently approach was undertaken. An 18ga PIVC was inserted for safe transport in case of acute deterioration and pre-hospital blood samples drawn. The patient was loaded on the stretcher without any physical exertion. Aspirin and GTN were withheld as the patient was asymptomatic and already on DAPT. Serial ECGs were captured and sent to the receiving emergency department. Discussion with the senior physician confirmed suspicious ECG for Wellens’ Syndrome and cardiology were contacted. The PCI lab was not activated at this stage, though we were advised to notify immediately if there was any change and to upgrade to Priority 1 conditions as appropriate. Defibrillation pads were placed readily behind the patient pillow as a precaution.

The patient remained stable throughout the transfer and upon arrival, we met the ED registrar who had lead the patients’ first VF arrest. It was confirmed that the ECG changes were new from his previous discharge and the patient was admitted under cardiology for urgent angiography.

*Patient has been de-identified and verbal consent was obtained authorising the use of ECG for educational purposes.