Kidneys are adaptable to loss of nephron mass and symptomatic changes as a result of increased creatinine, urea, potassium and alterations in sodium and water balance usually do not become apparent until renal function declines to less that 25% of normal functions, in which case renal compensation is depleted. 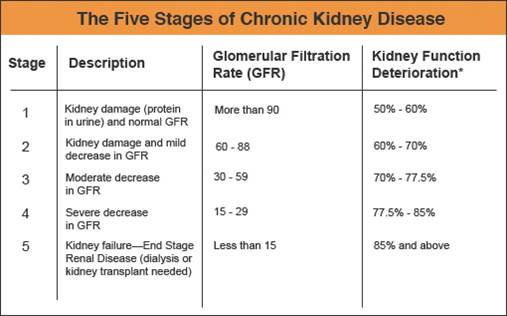 1 in 3 Australian adults are at risk of developing Chronic Kidney Disease as result of lifestyle & biological factors such as smoking, obesity, diabetes, age > 50yrs or indigenous descent. The infographic below shows the most common risk factors.

Risk factors that are known specifically to contribute to Chronic Kidney Disease are explained below:

There are 3 known contributing factors to Chronic Kidney Disease:

Normally, the renin-angiotensin aldosterone system (RAAS) is triggered by hypotension, however an increase in glucose also triggers the RAAS which causes vasoconstriction in the efferent arteriole, thus adding to the increase in glomerular pressure. This increase in pressure in the glomerulus damages the glomeural basement membrane (GBM) and eventually allow molecules through the GBM which otherwise wouldn’t fit.

As mesangial cells undergo prolonged pressure, inflammation occurs which cause expansion of cells. Cell expansion damages podocytes which further stretches and damages the GBM resulting in an increased thickness to the GBM.

As the renin-angiotensin-aldosterone system causes vasoconstriction, the peritubular capillaries (blood vessels which wrap around the rest of the nephron) have decreased blood flow and thus decreased ability to reabsorb and secrete. This leads to loss of essential nutrients and the retention of toxins.

Initial clinical findings will include an increased glomerular filtration rate (during stage 1, however will drop as chronic kidney disease advances), increased proteinuria (especially albumin, due to mesangial expansion) and haematuria (due to nephron death).

There are a large group of diseases characterised by damage of the glomerulus. Most of the diseases are caused by inflammation in the glomeruli (increasing inflammation leads to decreasing GFR). Most commonly affected areas:

The glomerular blood pressure is approximately 60mmHg and this BP is controlled by smooth muscles (juxtaglomerular cells) surrounding the arterioles. If the systemic hypertension is uncontrolled, these juxtaglomerular cells become overworked. Eventually they weaken, harden and narrow and are unable to control BP within the glomerulus.

Hypertension within the glomerulus damages mesangial cells, podocytes and the glomerular basal membrane. Once damaged, these cells are unable to filter correctly and chronic renal failure begins.