Anaphylaxis is any acute onset of hypotension, bronchospasm or upper airway obstruction where anaphylaxis is considered possible. Even if typical skin features are not present OR any acute onset illness with typical skin features (urticarial rash or erythema/flushing and/or angioedema) PLUS involvement of respiratory and/or cardiovascular and/or persistent severe gastrointestinal symptoms.

Anaphylaxis is generally under-reported and many unexplained deaths could be anaphylaxis. Statistically, the facts are difficult to collate due to various factors such as different hospital codes and the cause of death may not be specifically attributed to anaphylaxis, but natural causes.

Anaphylaxis the most severe form of an allergic reaction. Immediate allergic reactions are due to an interaction between Immunoglobulin-E (IgE) antibodies and an antigen (allergen) with a resulting release of chemicals from cells such as basophils and mast cells.

Antigens may enter the body by:

This normal antigen– antibody reaction is what protects the body from disease by activating the immune response. The immune responses are normally protective, however they can become oversensitive and become directed toward harmless antigens to which we often are exposed; this response is known as an allergic response.

These reactions do not involve the circulatory or respiratory system. They usually occur minutes to 2 hours of exposure to an allergen.

Treatment is typically with non-sedating antihistamines, which compete at the receptor sites with histamine. By doing so, this prevents histamine from performing its physiological actions. An antihistamine can help with the skin symptoms of an allergic reaction (like hives or swelling). They will not treat anaphylaxis.

Anaphylaxis is usually rapidly progressing and is an acute hypersensitivity reaction that can affect multiple organ systems. It is a severe life threatening event which may impact one or more of the cardiovascular or respiratory systems.

Anaphylaxis is caused by the widespread release of inflammatory mediators which results in a systemic increase in capillary permeability, smooth muscle contractility and peripheral vasodilation. Allergic sensitisation occurs when an antigen enters the body and activates the immune system response, leading to the production of IgE antibodies directed against that antigen. These antibodies then remain inactive on the cells until another exposure to the antigen and are referred to as antigen specific immunoglobulins.

When the antigen enters the body again, it binds to the IgE antibodies on mast cells and basophils. This interaction  causes degranulation of the cell and the release of chemical mediators to fight the allergen.

These chemical mediators include:

The effects of these chemical mediators include:

Because the body sees the allergen as dangerous, it tries to protect the body from this perceived invader, just as it would a harmful parasite. Antihistamines do not prevent or treat anaphylaxis as they don’t work against all the mediators and they don’t work immediately. Adrenaline reverses most of the effects listed above and it works within minutes so it is the treatment of choice for anaphylaxis.

Common causes of anaphylaxis are:

Symptom onset depends on the route of exposure:

Anaphylaxis is characterised by any one or more of the following (typically rapidly developing) symptoms: 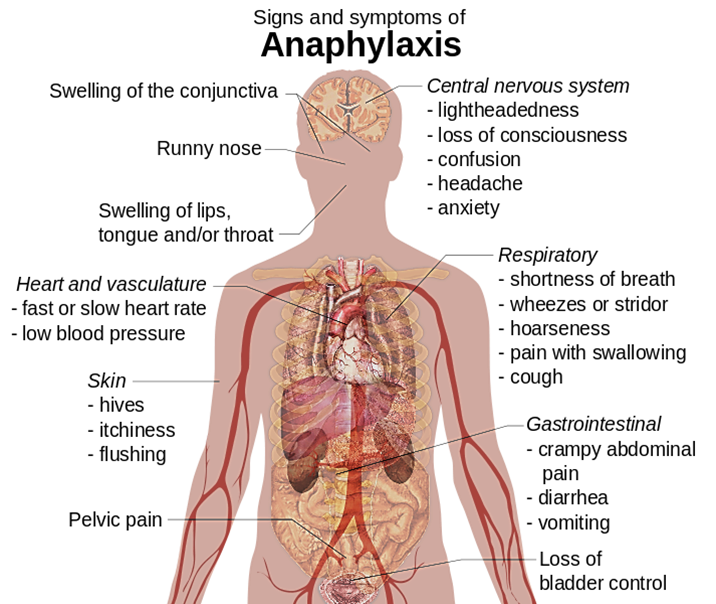