Emphysema is characterised by large permanently inflated alveolar air spaces due to the destruction of the alveolar walls and septae. The primary cause of emphysema is cigarette smoking and to a lesser extent other air pollutants. A genetic factor has also been identified as a contributor to early development of the condition in non-smokers. Below is an outline of the differing mechanisms in which the alveoli become damaged.

The damage to the alveoli and other changes to the lungs have many negative effects on lung function as described below:

The breakdown in the alveolar walls (as demonstrated in figure 2) will result in the following:

Fibrosis and thickening of the bronchial walls

This occurs due to chronic irritation and frequent infections associated with smoking and the increased mucous production. The effects that this has on lung function are: 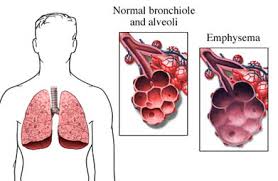 Figure 2: The breakdown of alveoli in emphysema and thickening of bronchial walls

Alveolar breakdown and thickening of the bronchial walls causes progressive difficulty with expiration. Over time this will lead to:

If emphysema continues to progress (may happen rapidly if avoidance of respiratory irritants does not occur) the fore mentioned effects will gradually worsen leading to a significant loss of lung tissue. The following processes occur with these patients:

In the late stages pulmonary hypertension and cor pulmonale (enlargement of the right side of the heart) occurs due to pulmonary blood vessels being destroyed coupled with vasoconstriction caused by hypoxia. The increased pressure in pulmonary circulation puts a large strain on the right ventricle leading the patient to display signs of heart failure.