Chronic obstructive pulmonary disease, or COPD, is a term used to describe a set of lung diseases that cause respiratory problems, by blocking airflow and making it hard to breathe. Diseases associated with COPD include some forms of bronchiectasis, chronic asthma, emphysema, and chronic bronchitis.

The effects of COPD are often well established and irreversible by the time a diagnosis is made however it can usually be managed effectively in most patients providing they modify their lifestyle and adhere to their prescribed medications. COPD is not an emergency presentation however when COPD sufferers contract respiratory infections exacerbation of the condition with sudden dyspnoea can occur due to their lung function being so compromised. Therefore it is essential for paramedics to have a good understanding of COPD as there are many patients living in the community who will require emergency care due to acute exacerbation of their illness. This document will describe the pathophysiology and explain the signs and symptoms of the common COPD conditions of emphysema, chronic bronchitis and bronchiectasis. It is however important to note that the diseases characteristics can overlap and share many common features. 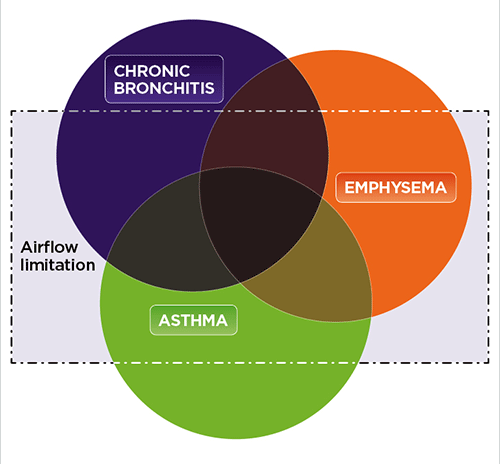 The two most common types of COPD include chronic bronchitis and emphysema. Both are characterized by damage to the lungs that prevent proper respiratory functioning. Main clinical features include shortness of breath, wheezing and a chronic phlegmy cough.

COPD is also known by the following names:

An example of increased VQ mismatch:

This will show an increase in capnographic end-tidal CO2 (etCO2).

An example of decreased VQ mismatch:

This will show a decrease in capnographic end-tidal CO2 (etCO2).

As previously described the disease process of COPD leads to high arterial levels of CO2. CO2 is able to cross the blood-brain barrier where it combines with water in the cerebrospinal fluid where it separates to form hydrogen ions and lowers pH levels. This triggers a reaction in the central chemoreceptors located near the medulla which are responsible for regulation. An increase in carbon dioxide levels leads to an increase in the depth and rate of respiration. Decreased levels of carbon dioxide will cause pH levels to rise and therefore a decrease in the depth and rate of respiration will occur. COPD leads to chronically high arterial levels of carbon dioxide and decreased levels of oxygen. Overtime this causes desensitisation of the central chemoreceptors. This causes a shift in the stimulus of ventilation to be managed by the peripheral chemoreceptors located in the carotid bodies and the aortic arch.  These receptors are stimulated by oxygen levels rather than CO2. This means that when low levels of Oxygen are detected respiratory rate and depth of breathing will increase (Figure 5). When oxygen levels are high the opposite will occur. This is referred to as hypoxic drive. 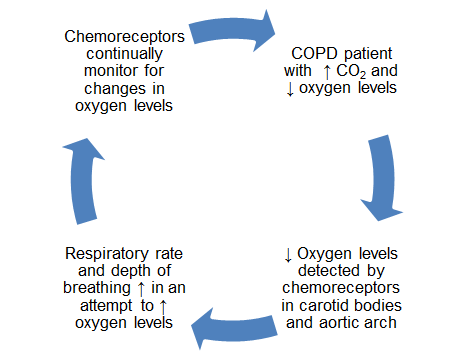 A common misconception is that supplemental oxygen given to COPD patients will cause chemoreceptors to detect sufficient oxygen levels and not trigger the drive to breathe leading to respiratory failure. This is not the case in the majority of patients; only a small number of patients with COPD can become desensitised to abnormally high levels of carbon dioxide found in the bloodstream caused by poor lung function. Where this occurs, low oxygen levels, rather than high carbon dioxide levels, become the stimulus to breathe. More commonly what may happen is increased hypercapnia occurring over a period of time due to the introduction of supplemental oxygen. Due to this reasoning there is a mindset in some clinicians that administering supplemental oxygen to COPD patients will cause respiratory failure or a significant increase in hypercapnia. This belief frequently results in the reluctance of clinicians to administer oxygen to hypoxemic patients with COPD. As paramedics it is very important to remember that hypoxia can have permanent and irreversible effects to patients and in the acute setting has vastly more damaging affects than hypercapnia.  Therefore in COPD patients with low oxygen saturations it is important to still provide supplemental oxygen aiming for saturations of 88-92%. Remember, hypoxia kills, hypercapnia happens!

Risk factors such as smoking, age and obesity can complicate the association of COPD with certain comorbidities. The interaction between some medications can also add to this challenge. ie. administering bronchodilators may induce cardiac dysrhythmia. Administering β-Blockers may worsen lung function. However comorbidities such as HTN, cardiovascular disease and diabetes are so prevalent in patients with COPD that they must be considered during assessment.

In the treatment of an acute exacerbation of COPD, oxygen should be administered. The hypoxic drive theory has made many paramedics overcautious of administering oxygen. Although during oxygenation respiratory rates can reduce in some patients with COPD, within 15 minutes, the respiratory rate typically returns to sufficient levels.

Patients with COPD optimise gas exchange due to hypoxic vasoconstriction. During excessive O2 administration, vasodilation occurs which moves blood to inadequately ventilated areas of the lungs. This results in reduced O2 absorption and increased CO2 retention.

Therefore "controlled or low dose supplemental oxygen" therapy should be utilised. Although over-oxygenation may have a detrimental effect, insufficient-oxygenation will be fatal.